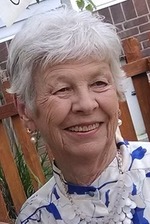 Theresa Anne MacQuarrie Martin, age 86, beloved mother and grandmother, died at her home on Wednesday, March 27, 2019, after an extended illness. Theresa was born in New York, NY on June 7, 1932, the daughter of John Neil and Theresa McKeever MacQuarrie, both who preceded her in death. Also, preceding her in death was her husband, Dean Edward Martin, a daughter, Lisa Anne Martin and a son Dean Edward “Chip” Martin. She had attained her Associate’s Degree in Psychology, was a Docent for Gulf Breeze Zoo in Gulf Breeze, Florida, and as a homemaker, was lovingly known by her family as Anne, Mom, Grandma and Grammy.

A Memorial Mass will be held at the Catholic Church of the Annunciation in Paris, KY on Tuesday, April 2, at 11:00 a.m. and Recitation of the Rosary at 10:30 a.m. with Father Daniel Fister officiating. There will be a graveside service held in Cornwall Bridge, Connecticut at St. Bridget’s Church Cemetery at a later date. The family request memorial contributions to be to Bluegrass Care Navigators, 1317 US-62, Cynthiana, KY 41031.