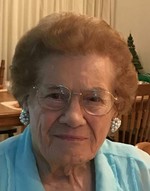 Mary Della Montgomery Ogden, widow of Shelby Lee Ogden, passed away peacefully at Bourbon Heights on Friday, May 10, 2019, at the age of 87. She was born on September 20, 1931, in Jessamine County, Kentucky, the daughter of the late William and Lillie Brunner Montgomery. After her marriage to Shelby Ogden in 1949, Mary became a homemaker and farmer. In 1955, she became a member of Antioch Christian Church where she was a Committee Chairman and Sunday School Teacher. Besides her husband and parents, she was preceded in death by a sister, Margaret Cook. She is survived by a special companion, Ron Chanslor, as well as a number of nieces and nephews.

The family would like to express a special thanks to the members of Antioch Christian Church for their prayers, care and acts of kindness and love, especially transporting Mary to dialysis.

Visitation will be on Monday, May 13, 2019, at Hinton-Turner Funeral Home between the hours of 5:00 p.m. and 8:00 p.m. In lieu of flowers, donations are suggested to go to Antioch Christian Church, 5362 Paris Pike, Paris, Kentucky.