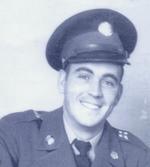 Cecil Linville, age 87, husband of Edna Matherly Linville for 64 years, the son of the late Lona Bates and James R. Linville, passed away at home on August 2, 2019. Cecil was a construction worker for 20 years with Hinkle Contracting, and he started his own business in tree service and well drilling. He served in the United States Army during the Korean War. Besides his parents, he was preceded in death by his sister, Josephine Bussell; brothers, Harvey, John, Ben and Albert Linville; and daughter-in-law, Sandy Linville.

The memorial service for Cecil Linville will be on Wednesday, August 7, 2019 at 12:00 noon at Old Union Christian Church with Rev. Scott Winkler officiating. Visitation will begin at 10:00 a.m. prior to the service.